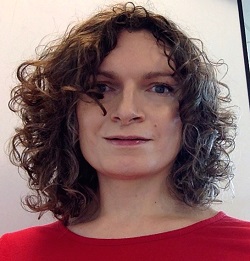 The Ohio LinuxFest is delighted to have Catherine Devlin return to our stage, this year as a keynote speaker. Catherine is an Innovation Specialist at 18F, a startup within the U.S. government dedicated to popularizing and propagating modern, open-source software development throughout public service. She is a long-time speaker and volunteer in the regional FOSS community, served as PyOhio’s founding chair, teaches introductions to programming and common FOSS topics, and is president of the Dayton Dynamic Languages user group. She is a veteran PyCon speaker and has met Guido, Larry, and Rasmus (though never at the same time).

Catherine grew up in Minnesota, then studied chemical engineering at MIT. A freak accident in 1999 transformed her into a database administrator… by way of the secretarial pool. She enjoys studying foreign languages and lives in the woods near Dayton with her wife and a small herd of horses. Having presented at Ohio LinuxFest in 2007, 2008, 2010, 2011, 2013, 2014, and 2015, we’re excited to have her back to deliver a keynote address!